Home > Blog > Detailed guide on how to buy and sell altcoins

Cryptocurrencies have become a popular way to invest. Those wishing to acquire such an asset invariably face the question: which kind of crypt to buy. Bitcoin is considered the most popular reliable, but altcoins provide a large profit (today they account for 60 percent of the cryptocurrency market, and in total they are estimated at more than a trillion dollars).

Bitcoin is the progenitor of all cryptocurrencies existing on the market. It has the largest capitalization, the best liquidity and proven value. But Bitcoin has many competitors. These digital savings were called altcoins or alternative coins. Given the huge number of digital currencies, before investing in any of them, you need to understand the differences between altcoins, their benefits when investing and the mechanics of buying them.

For those who missed our article on the topic “What is an altcoin”, we will tell you what an altcoin is, and what kinds of it there are.

In short, an altcoin is any kind of cryptocurrency that appeared later than Bitcoin. Even its name means “alternative coin” (alternative coin). Today, there are over 10 thousand different altcoins in circulation, the most popular among which is Ethereum. The latter covers 19 percent of the cryptocurrency market.

Structurally, altcoins are almost identical to Bitcoin, since they use a common type of code. However, Bitcoin has a number of disadvantages. For example, algorithms used to create blocks and verify financial transactions require large energy costs. When creating altcoins like XRP, they try to get rid of such shortcomings.

There are a number of varieties of altcoins.

This is the name of a type of cryptocurrency in which the price is directly linked to a more stable asset. Usually it is a fiat currency, i.e. real money issued and secured by the Central Bank of a country. In addition, the price of stablecoins can be tied to precious metals or other cryptocurrencies.

In this case, stablecoins are provided with a reserve in real currency (most often, American dollars). This money acts as collateral for the subsequent issue of a certain number of coins, the price of which depends on the exchange rate of the currency to which they are linked.

The first example of a stablecoin is Tether.

In this example, you can buy altcoins inspired by various well-known Internet memes. They are usually issued en masse (the issue of bitcoin is limited). The value of memcoins mainly depends on the community. Most often they are purchased by celebrities, influential people and fans of being in the trend.

One of the reasons for the purchase of the crypt is the hype. Therefore, memcoins as an investment are significantly riskier compared to other types of crypts (the hype passes quickly). Fans of reliability should better buy ether.

Utility utilities are a type of altcoins that provide owners with access to the acquisition / receipt of services or goods of a company in a certain blockchain.

Security tokens are securities in digital form (this is not a cryptocurrency).

Forks
Fork – splitting the blockchain into 2 or more branches when changing the method of its construction. There are soft forks (the changes are compatible with the older version) and hard forks (incompatible changes, in fact the formation of a new altcoin).

Altcoins work by the same mechanism as bitcoins, but there are also differences. Crypto blocks in Bitcoin are created using an extremely energy-consuming algorithm called proof of work (computer solving a puzzle). Altcoins use proof of stake or other algorithms that require less energy and time to check the operations performed.

Ethereum (ETH)
is the largest altcoin — Ether, the capitalization of which is on the 2nd place after bitcoin. The peculiarity of the Ether is the possibility of “smart contracts” (an electronic algorithm for exchanging money or other assets, essentially electronic contracts).

The second difference between Ethereum and Bitcoin is that ether has automatic protection against rising inflation. In bitcoin, the so—called “halving” is used – once every 4 years, the earnings of miners are automatically reduced, which makes its mining less profitable. Do not forget about the limited issue of bitcoin (21 million coins). Ethereum uses “reduction”, in which the profitability of mining also decreases, but this is done manually, if necessary. At the same time, there are no restrictions on the emission of ether. The last difference is the 5 times higher speed of financial transactions. 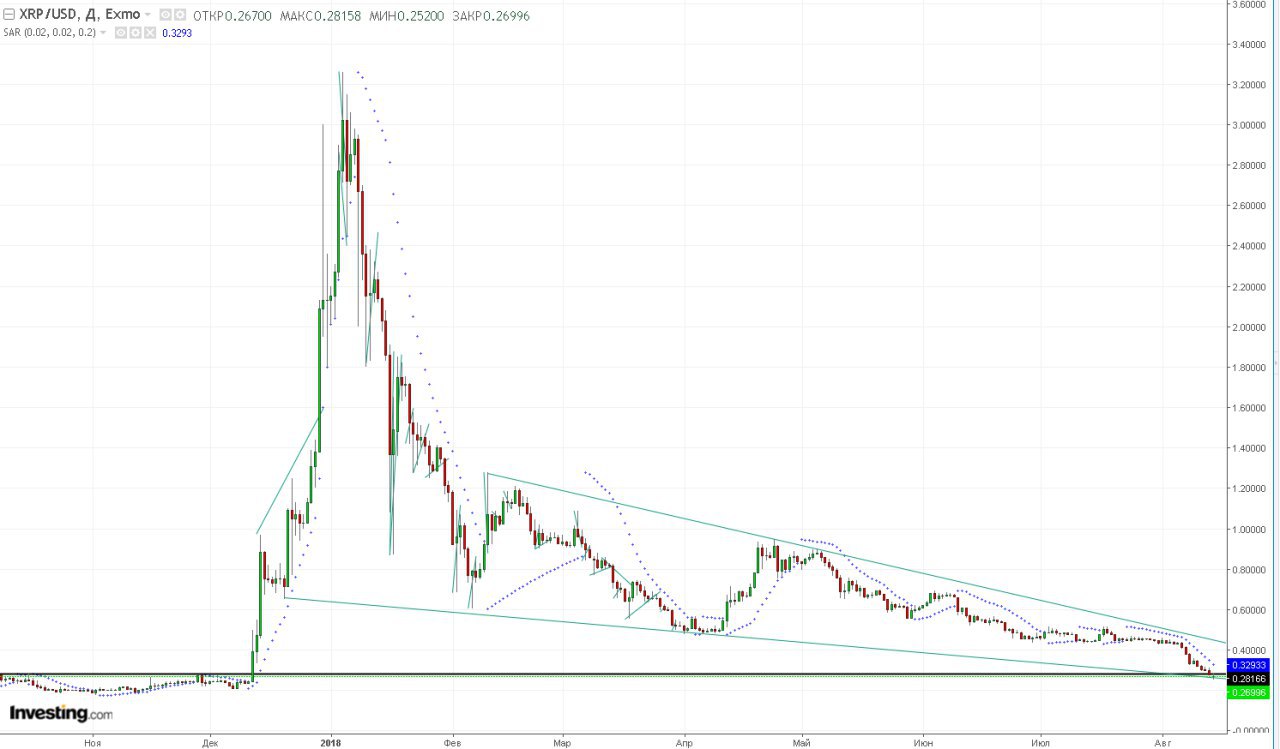 Litecoin (LTC)
Litecoin was launched in 2011 as a “lightweight version of Bitcoin”. This digital coin is created on the same technology as Bitcoin (its blockchain is an offshoot of Bitcoin). Like Bitcoin, Proof-of-Work is used here. The difference in terms of mining is that Litecoin uses a different algorithm and differs by 4 times faster creation of new blocks and, accordingly, the speed of operations.

Litecoin has a lot of advantages, including good scalability, accelerated transactions, low fees for conducting financial transactions. The disadvantages of Litecoin include excessive association with the “parent” of the crypt — Bitcoin and the active use of Litecoin in the dark web.

Ripple (XRP)
Ripple is ranked 5th by capitalization among the most valuable tokens created on the basis of blockchains. Ripple is a technology that works as a cryptocurrency and at the same time an electronic payment network for financial transactions.

With the help of Ripple, it was possible to remove a number of disadvantages of “ordinary” banks. Transactions are carried out in seconds, the commission is minimal. A significant advantage of Ripple is that this network supports not only its own coin, but also other currencies, crypts and even goods. The downside is centralization, which goes against the idea of cryptocurrency.

Polkadot (DOT)
Polkadot is a unique cryptocurrency based on the Proof-of-Stake algorithm, which is compatible with other blockchains. The main component of Polkadot guarantees the interaction of different networks. It provides support for parachains (working in parallel with other blockchains that have their own tokens).

The main difference between Polkadot and Ether is the ability to create your own blockchains with parallel use of security schemes used in the project (this was called general security).

Where can I buy an altcoin?
Altcoins are an extensive group of crypto assets, which includes not only coins, but also tokens. In fact, this is the entire cryptocurrency, with the exception of Bitcoin. Therefore, there are many investors who want to invest in these savings.

During the purchase of cryptocurrencies , you should:

Choose which coins you are going to invest in.

Check what the price of cryptocurrencies is at the moment.

Decide on the number of coins to buy.

Find a suitable platform that trades the selected crypt.

Register on it and make a deal.

When choosing altcoins for investment, experts recommend taking more than one type of coins. It is better to diversify funds into a couple of assets (in the case of long-term investments, this is most relevant).

As a trading resource, you should choose the most reliable platform like Binance, Coinbase and KuCoin. In addition, you can sell bitcoin, exchange or buy altcoins using a well-established service Exnode.ru .

Do not rush to immediately proceed to the purchase. To begin with, it is worth conducting a thorough analysis of the market to determine the current trend. If you successfully open a position and close it, you can get a good income. Specialized analytical tools should be used for analysis.

Altcoins can bring a lot of money, but the risk of large losses is also high. Therefore, it is necessary to treat investments in this type of crypt as responsibly as possible, even if the price of cryptocurrencies that we purchase is low.

How to buy altcoins on Binance
Binance is the largest cryptocurrency exchange in the world. The platform works with most of the existing cryptocurrencies and supports more than 140 altcoins. There is even a unique token (BNB). The commissions for cashing out here are among the lowest among crypto exchanges. There are mobile apps for Android and iOS devices.

To buy crypto for rubles on Binance, you should verify on the site by passing KYC (Know Your Customer — the procedure of bank verification for the absence of suspicious transactions), specify your full residential address and personal crypto wallet. .

We replenish the account on the Binance using a bank card or a transfer from a cryptocurrency wallet of another exchange. Then we choose which altcoins to buy, specify its quantity and confirm the transaction. The funds are immediately credited to the balance of the wallet on the Binance.

How to buy altcoins on Coinbase
Another major cryptocurrency trading platform is Coinbase, which has been operating since 2012. The exchange supports 23 varieties of cryptocurrencies and common fiat currencies.